It’s not hard to understand why virtually every civilization has venerated the sun and moon: both are such inextricable parts of our existence. The stars and planets are believed by some to hold magical power over humanity. Personally, I find the sky mysterious and magical enough as it is, without resorting to the supernatural.

Of the songs we recorded for this album, six are originals. I wrote three of them in English (“Kiss Me Like That”, “Love in outer space”, and “Winter Eclipse”), and one each in Spanish (“Cuando sale la luna”), Portuguese (“Mundos escondidos”), and French (“Le tournesol”).

It was not always a conscious decision on my part to write about astronomical or sky-related themes, but my love for these subjects has surely crept into my subconscious writing process over the years… The rest of the songs are either great jazz standards like “Stardust”, “Skylark”, “They all laughed”, “Moonlight saving time”, and “Blue moon”; or beautiful folk/pop tunes: Sting’s “Valparaiso” and James Taylor’s “Sweet Baby James.” 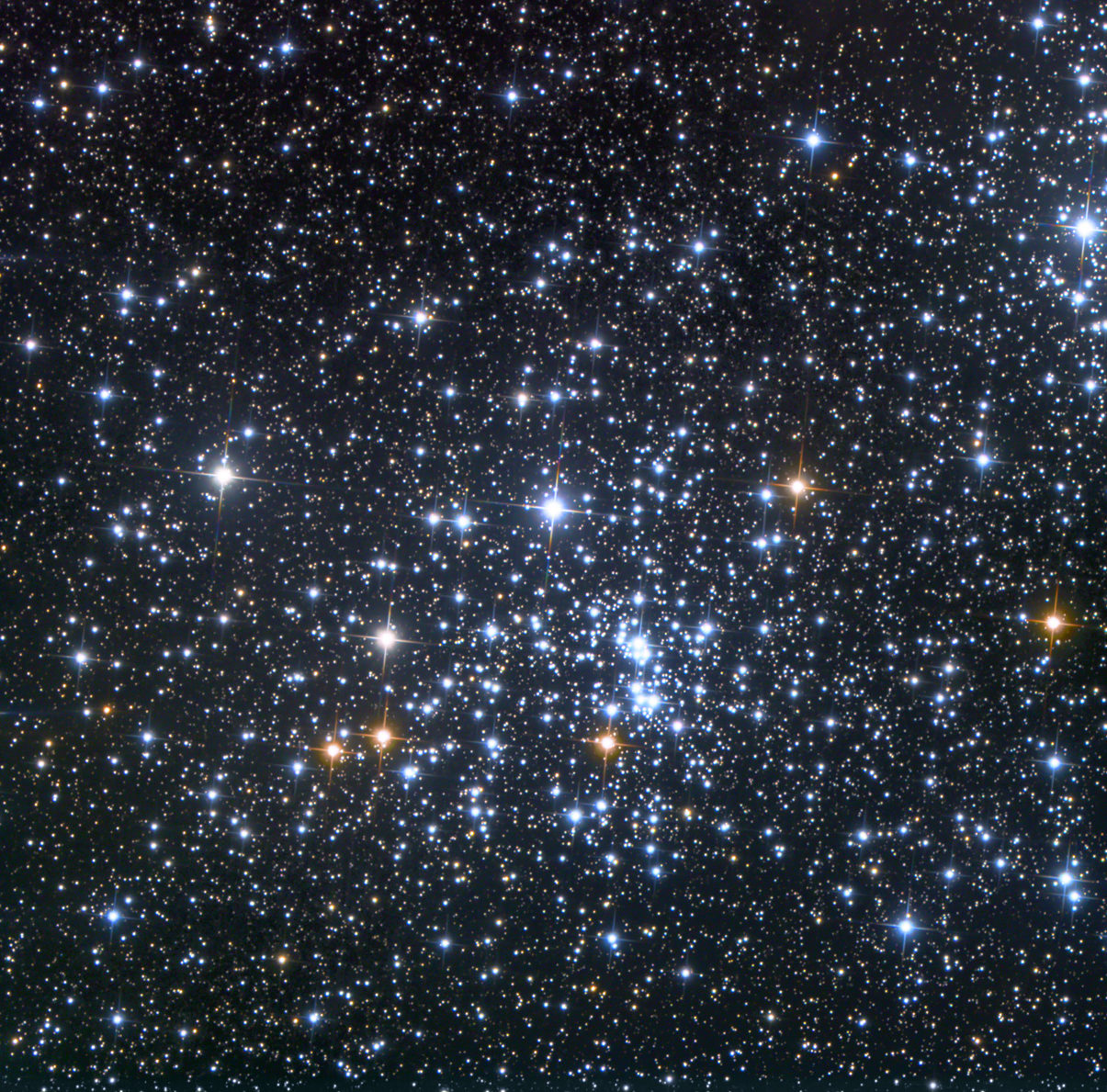 I wrote the refrain of “Kiss Me Like That” first, out of a mnemonic we teach our astronomy students to help them remember the order (from hotter to colder) of stars and brown dwarfs as they are categorized: O, B, A, F, G, K, M, L, T. What started out as a refrain turned into a song about a relationship gone south, and the forces that bring people together and pull them apart. (The image on the right shows stars of different types – the bluer ones are ‘O’ or ‘B’ stars. They’re very hot! The red ones are ‘M’ stars, and they’re a lot less hot…)

I wrote “Le Tournesol” (The Sunflower) from our sun’s point of view, as it reaches out to reassure a sunflower that it will chase the blues away. I loved the idea of the sun becoming smitten by a flower, and trying to console it by sweeping away the rain and erasing its nightmares. “Cuando sale la luna” (When the moon comes out) speaks of a sultry evening when the smells of the night enter through open windows. This song celebrates the mystical beauty of our lonely satellite, and the magical way it can change our perception of the night.

Rodgers and Hart’s “Blue moon” evokes the charming notion that our moon might mirror our feelings. Every few years, because the lunar and solar calendars are not quite synchronized, there’s a 13th full moon. Some say this is where “once in a blue moon” comes from. Others swear a blue moon only occurs extremely rarely, for example when volcanic dust makes the moon seem bluish. It’s a lovely song, no matter which meaning we choose for it… 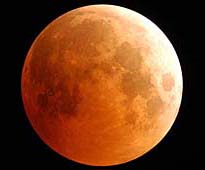 The moon holds sway over the night like nothing else, and sometimes it is a companion on an otherwise lonely night. Both the solitary cowboy in James Taylor’s “Sweet Baby James” and the sad gypsy in Hoagy Carmichael’s “Skylark” sing to the moon.

And when the moon gets swallowed up by Earth’s shadow, as in “Winter Eclipse”, it is a truly breathtaking sight. I wrote this song remembering a delightful but freezing winter’s evening spent with a special friend, shivering in a couple of garden lawn chairs as we watched a lunar eclipse over several hours. He kept making hot toddies to warm us up. It was a magical if slightly surreal night. (Left: the moon in eclipse).

“Moonlight saving time”, a rarely performed showtune by Irving Kahal and Harry Richman, puts forward the cheeky idea that we ought to be able to extend the moonlit night for the benefit of lovers everywhere.

“Love In Outer Space” is about a girl who’s tired of what the boys on Earth have to offer, so she’s casting a wider net. What gives her hope? She’s a die hard fan of SETI, the Search for Extra Terrestrial Intelligence! If intelligent beings exist elsewhere, they might use radio waves to communicate over long distances, and some say they’d choose a frequency close to the hydrogen line.

In the 1970s, a message with a diagram of our Solar System (pictured on the left) was beamed into outer space from the Arecibo observatory, the world’s largest radio telescope carved out of a hill in Puerto Rico. The Pioneer spacecraft flew past Mars and Jupiter, sending back amazing pictures and carrying a plaque with anatomically correct drawings of humans. (Interestingly, NASA got a lot of flack for sending naked pictures into space!) 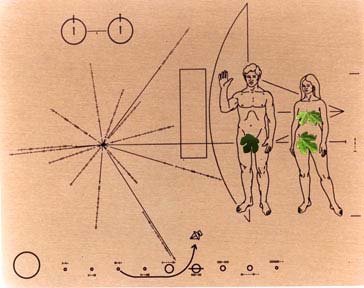 After all this, does our girl finally find Love In Outer Space? Alas, no. Thus far, ET hasn’t answered. But in the late 60s, a mysteriously repetitive signal was discovered by astronomer Jocelyn Bell Burnell. It was half-jokingly given the designation ‘LGM’ – Little Green Men. What she had discovered turned out to be even stranger than ET: pulsars. Her mystery signal was caused by an incredibly dense star made of neutrons, which rotated about once per second.

My song ends with sounds from outer space: an even quicker pulsar that rotates many times per second, the Vela pulsar. (The sound sample is courtesy of the Jodrell Bank Observatory in Manchester, UK). Overlaid with that is a steady morse code pulse, beating out our position from the Sun… 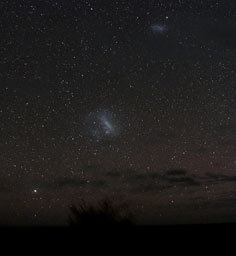 When I was a grad student, I spent a year in Melbourne, Australia. The natural beauty of the country, the kindness of the people, and the utterly foreign night sky all contributed to my sense of wonder about the place. For the first time in my life, I saw not just one, but two galaxies with my own naked eyes: the Magellanic Clouds.

“Mundos Escondidos” (Hidden worlds) talks of a late-night stroll, after a recent rainfall had dampened the streets. The stars came out and I couldn’t help but be amazed by how very old the light from these galaxies is by the time it reaches us. I wrote this one in Portuguese in honour of Magellan himself, the great Portuguese explorer whose crew was the first to circumnavigate the globe.

Another song for the Southern Hemisphere: Sting’s “Valparaiso” tells of the Southern Cross and chasing Sirius (the Dog Star) across the sky. For centuries, mariners navigated by the stars, and here they’ll guide this sailor’s true love to safety ’round the Cape Horn.

The Gershwin brothers’ “They All Laughed” pokes fun at those who mocked great discoverers. I love the way this song celebrates the dreamers and the visionaries who have helped open our minds. As Yeats wrote, “Mock mockers after that…”

This album is for anyone who has ever been stopped in their tracks by the majesty of sunrise, the haunting beauty of the moon, or the twinkle of a star. I hope this collection of songs will put a smile on your face. May you never lose your sense of wonder at the universe.

In late December of 2008, I was invited to perform on CBC Radio’s The Sunday Edition, during a piece on the International Year of Astronomy for which I’d be talking about Galileo, Copernicus, and other astronomers with host Michael Enright.

While pondering what music I might sing to accompany the interview, I ended up with a shortlist list of songs that celebrated humanity’s ongoing fascination with the sky and what lies beyond it. I ended up singing two songs on air accompanied by Joey, “Blue Moon,” and an original of mine, “Kiss Me Like That.”

But that list of songs set me thinking… and the incredibly positive response I received about “Kiss Me Like That” from listeners across Canada helped me decide to do this recording. So I owe huge thanks to the CBC, The Sunday Edition team I worked with (Michael Enright, Jean Dalrymple, and Mark Ulster), and all the wonderful fans who wrote in, demanding that I make this record.

Joey is a subtle, melodic guitarist with a warm and lovely sound. I was especially delighted with his beautiful work on “Valparaiso”. But his dextrous fingers sure can fly on the up tempo tunes like “Moonlight saving time.” Kieran always nails the vibe with ease and musicality, and so much joyful energy (listen to that grooving bassline he came up with on “Love in outer space”). You can hear the smile in his playing!

Anthony always makes every song sound unique, and plays with such firey energy. He switches effortlessly between grooves, from my raga-meets-reggae song “Love In Outer Space” to the swing of “They All Laughed”, and he can do everything in between. No matter what style he plays, he owns it completely. And Kelly has such a beautiful voice on saxophone. I first met Kelly 17 years ago in Montreal when I was just starting out as a young jazz singer. He already sounded great then, and today he’s utterly exquisite.

What a joy to work with this intuitive, deeply musical group. 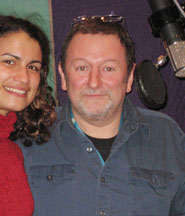 So on January 11 and 13, 2009, amidst the cold and snow, we went in to record a new album. Getting everyone together on such short notice was amazing enough, but finding the right studio was no less important. In this I was especially lucky because I ended up with one of the very best: Jeremy Darby at Canterbury Studios in Toronto.

I’m grateful to my band for recommending him, because I can honestly say it was one of the most pleasant recording experiences I’ve had on either side of the Atlantic. Jeremy brings a producer’s ear to the table, and we were so often on exactly the same wavelength. He’s a true gentleman, a consumate professional, and a joy to work with.

All the tracks on this album, as on all my albums, were recorded live to multitrack. The only tracks with any overdubbing were “Love in outer space” where I laid down backing vocals afterwards, and “Valparaiso” where Joey played both his accompaniment and the solo over it. The rest was all done live to maintain the spontaneity and interplay of a live jazz performance. I abhor the concept of autotune and never use it. So these recordings are as frank and honest as a live performance. We hope you’ll enjoy them!